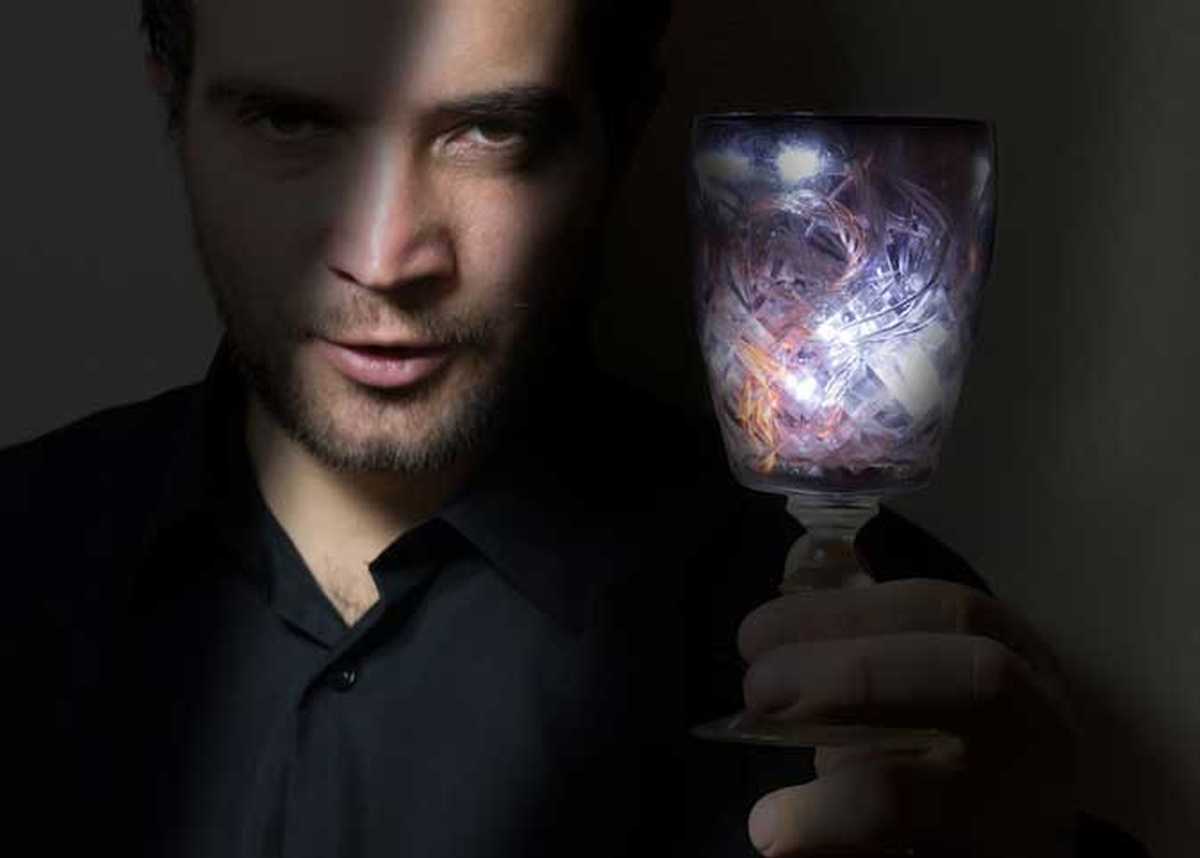 Fact: you don’t want your profile picture to look like something that goes “bump” in the night.

But accidentally giving off creepy vibes is easier than you might think — especially if you’re a man.

Why? Because people — especially women — worry about their safety when interacting with and eventually meeting strangers from online.

Not everyone realizes this, but the word “creepy” is used to connote a subtle sense of danger. We say it about people and situations that make us feel unsafe. To be more specific, psychologists have recently defined creepiness as a state of unpredictability that makes others feel threatened.

So let’s talk about some common photo mistakes that can make a photo look creepy — hurting your chances at connections on LinkedIn and dating apps.

#1 Taking the Picture Too Close-Up 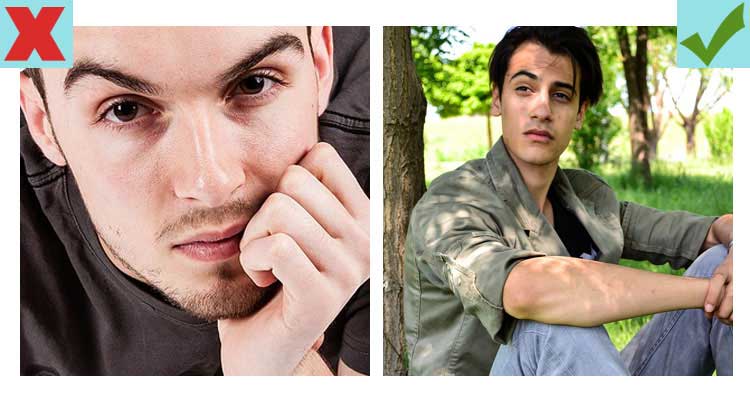 According to research out of Caltech, pictures taken two feet away or less are consistently rated as less trustworthy and attractive.

That’s because pics taken very close-up mimic the feeling you get when you’re standing very close to someone. This can be uncomfortable for someone who’s never met you before, setting off subconscious alarms. 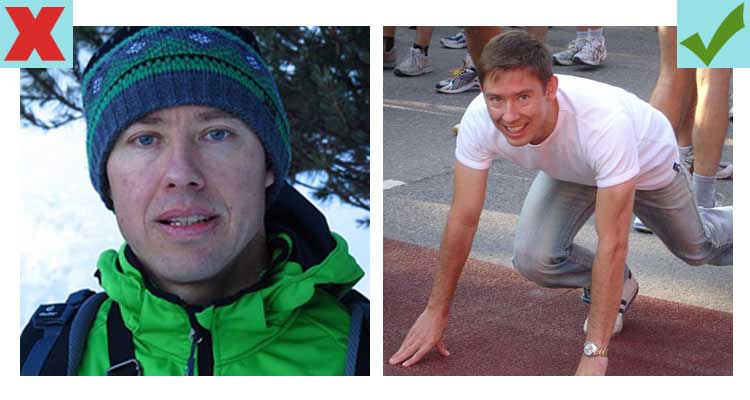 Sometimes you think you’re making one face, but other people see something completely different. Okay, not sometimes — all the time.

Most people who look threatening in their profile pics have no idea that they do.

When scientists go to study photo impressions, volunteers generally express great certainty that they can guess personal qualities of the people in the pictures.

This is unfortunate because they are dead wrong. All they’re actually doing is extrapolating a whole lot from each picture — exaggerating anything they see and downplaying what they don’t. (e.g. Smile = friendly, kind, happy person. No smile = unsocial, bad, negative person.)

Neutral (i.e. not smiling) expressions are risky for this reason. Someone with no other information about you to go on might just misinterpret your so-called neutral expression as “hostile” or “sinister” depending on everything from what else your body language is doing, to the lighting, to their own mood at the time they view your picture.

Now, I’m not saying you can’t pull off a non-smiling picture, but you’ll definitely need to test it on Photofeeler to ensure creepy vibes are at bay. 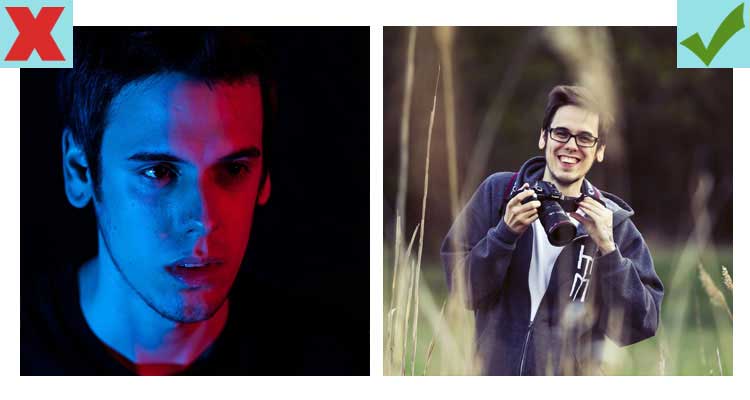 Why? Because they discolor skin and/or obscure your face.

To you, the photo might look perfectly normal. But that’s because you’re familiar with what you look like in regular, daytime conditions. A stranger doesn’t fill in the blanks this way — they just see an obscured face.

According to Photofeeler data, natural daylight is where it’s at. In fact, this has shown to be one of the key differences between photos of the same person with very low and very high attractiveness ratings.

For best results, find a window in the daytime (preferably when the sun is on the other side of the building / not in direct view). It’s best to take pictures directly across from the window to illuminate your whole face evenly, free of shadows. 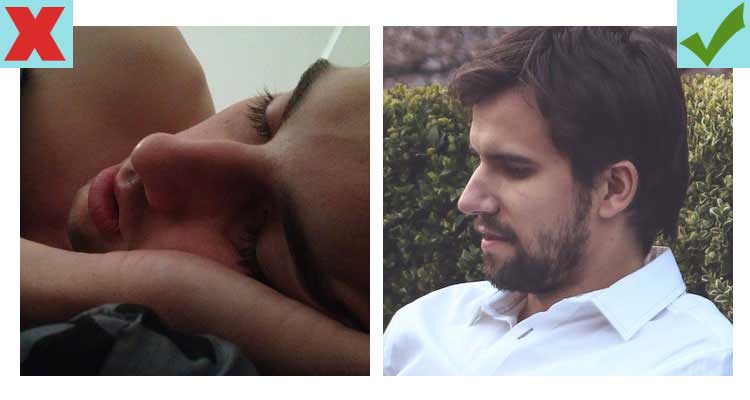 Don’t appear to be naked in your profile photos. You should also avoid being pictured in bathrooms or bedrooms.

Look, you probably already knew I was going to say this. But do you really understand why? The answer is similar to the explanation that we already covered for avoiding very close-up photos.

A photo of someone in a bedroom, bathroom, and/or in a state of undress is very intimate in nature. This intimacy can come across as being overly forward, aggressive, or predatory. So, remember: using that selfie you took in bed is not without real consequences.

On the other hand, pictures taken in public places more closely mimic the way we typically interact with strangers, so they’re less likely to set off alarms. 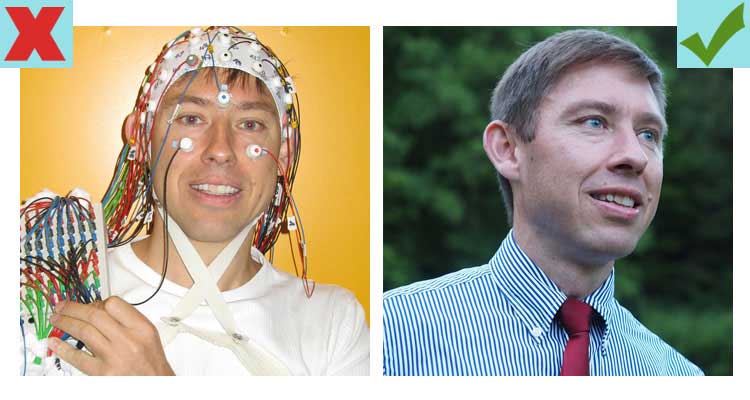 Don’t let potential connections be thinking this when they see your photo.

There’s a misconception going around that being “random” makes you seem spontaneous and fun. This is actually false.

Sure, in the company of a friends, the unexpected can be hilarious or just downright intriguing.

To strangers, however, weird stuff is just weird. And if it’s in your picture, it probably means something is off about you.

That said, profile pictures should stand on their own without explanation needed.

Well anyway, that concludes some of the most common photo mistakes that make a person look creepy. So save the scary for Halloween and put these tips to use to make consistently better impressions online!