Got feedback from Photofeeler? Great. Now it’s time to do something with it.

How do you choose your best dating profile pictures once your test results are in?

We’re breaking down how to pick a good mix of photos, how to order them, how to avoid misrepresenting yourself, and more.

Smart, trustworthy, and attractive are the three dating-category traits on Photofeeler for a reason. Hitting all three will get you the best results on dating apps. (More on that point later.)

So first, find the “Sort” button near the top of your My Tests page, and select “Total Score” in order to see which photos did best overall.

Keep these high scorers in mind as you make your next considerations.

As far as we currently know, the attractive trait on Photofeeler is most closely tied to right-swipes on Tinder.

What this means is, without any attractive photos, you’re unlikely to get any matches at all. But with photos that score above average in attractiveness, you ought to begin receiving matches.

If you’re a man, that is. If you’re a woman, you might still get matches with unattractive pictures because many men right-swipe on everyone and only look at the profiles later. But you’re unlikely to get genuine, enthusiastic interest.

So your attractive scores on Photofeeler should be the first ones you pay attention to.

However, attractive scores are not the end of the story.

That’s because the quality of people behind those right-swipes goes up if your photos also look smart and trustworthy.

So attractive photos may pull you some low-quality matches. But nailing all three of these traits means you’ll hear from more interesting, more emotionally stable people.

Fact is, “like attracts like.” So if you portray smarts and trustworthiness, you’ll attract people with those traits. What’s more is these traits correlate with other desirable characteristics, such as responsibility, level-headedness, willpower, and ambition.

People who are attracted to smarts and trusworthiness are also more likely to be seeking a relationship than hookups.

*Women might still get matches from men who right-swipe on everyone and only look at the profiles later. Any messages will likely be hookup-centric. If you’re a man, you might match with scammers or bots.

So now we understand the role of the three traits, but there’s still another thing to consider:

If you look at your top-scoring pictures, you’ll see they tell a story.

Say, for instance, your highest-scoring pics are all from the same photo shoot. Then you’ll notice that one of these pictures alone looks cool and interesting, but 6 of them altogether tells a story about a guy who spends a lot of time doing photo shoots by himself. (I’m not saying people are right to judge this, but they will.)

Or maybe your three best-scoring photos have you laugh-smiling at social events. This portrays you as extremely outgoing and happy. So, ask yourself: does this series of photos represent you a lot, a little, or not at all? 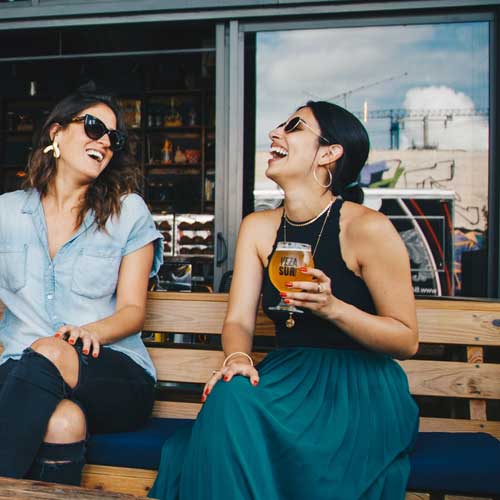 You don’t have to portray “bad” parts of yourself in order to make an honest profile. That is a total misconception. In fact, it’s perfectly normal and healthy to put your best foot forward at the beginning of any relationship.

But if your profile is a total and complete fiction — it paints a picture of someone who has completely opposite personality traits from you — you’re unlikely to attract matches who you’ll actually hit it off with.

Unfortunately, people screw this up all the time. Take, for instance, a guy who has a warm and empathetic demeanor in person, but he never smiles in pictures because he wants to seem tougher than he is. (But then he ends up looking like a total jerk, which is the literal opposite of who he really is.)

To clarify, what I am not saying is that you should include your least attractive picture “in order to be honest” and deter anyone who “can’t handle you at your worst.” Literally this is the worst idea. If Brad Pitt included his least attractive picture, no one would right-swipe on him either. And the capacity to accept someone at their worst only comes later in a relationship, once a bond has been formed.

Now, you may have realized in the last step that your profile could actually use some of your lesser-scoring photos in order to tell a better, more accurate story about yourself.

For instance, you might want to add more group shots, a picture of you in skiing gear, etc.

Here’s the best variety of photos and photo order to shoot for:

And that concludes it.

I hope you now have a greater understanding of how to take your Photofeeler feedback into account when you choose your dating profile pics.

Realizing you don’t have all the photos you need yet to make a great profile? Try our advice for getting new pics, and we’ll see you back over at Photofeeler to test out your next batch.