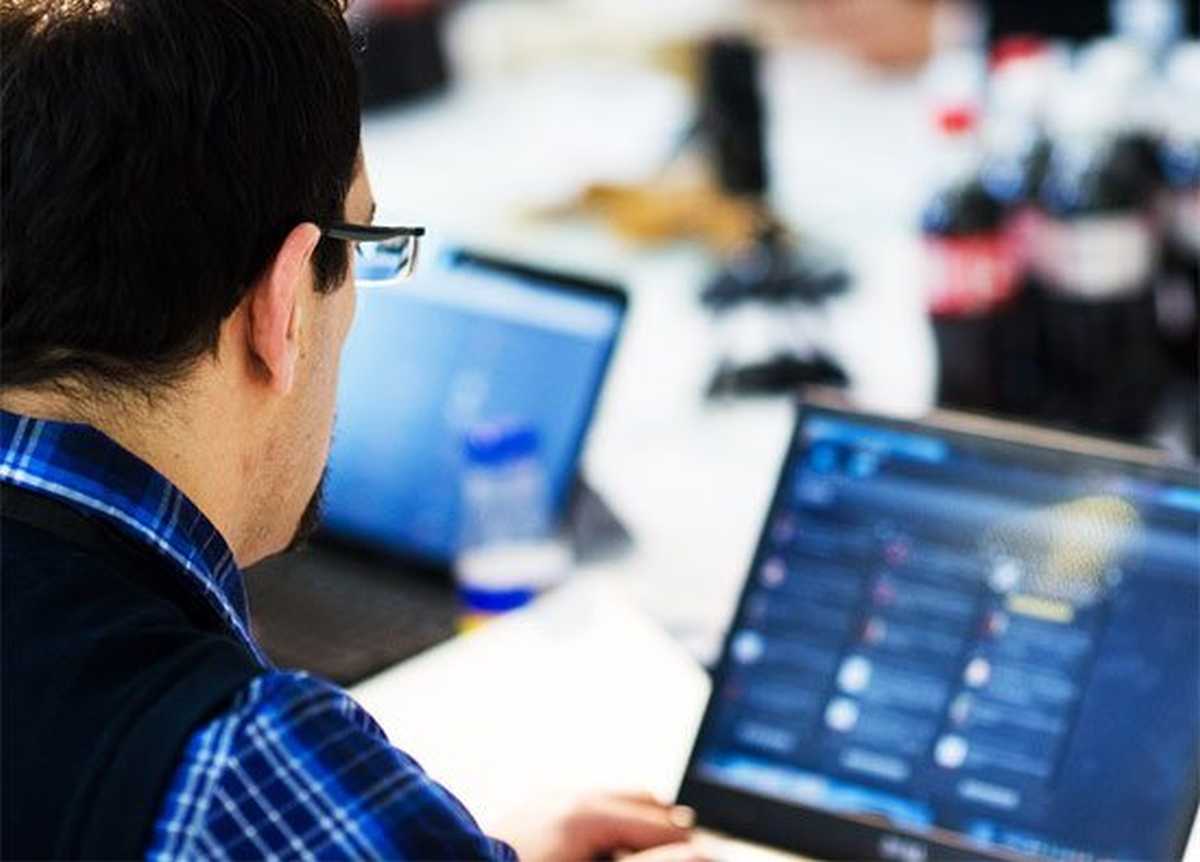 A profile photo is your representative in the digital world.

We look to it every time we interact with you online, and even imagine it speaking the words you type.

Profile photos are so essential to modern communication that a good one’s become a basic necessity. And that couldn’t be truer than for those of us whose professional lives are tied to social media profiles.

That’s why we at Photofeeler decided to set our first major study on the goal of targeting just a few, overarching guidelines.

That is, we asked ourselves— if we set aside characteristics like gender, age, and physical traits, to focus only on what we can easily control— what elements reliably produce a better professional headshot photo (for use on LinkedIn, Facebook, Twitter, etc.)?

The study was based on over 60,000 ratings of perceived Competence, Likability, and Influence for 800 profile photos in our Photofeeler database. 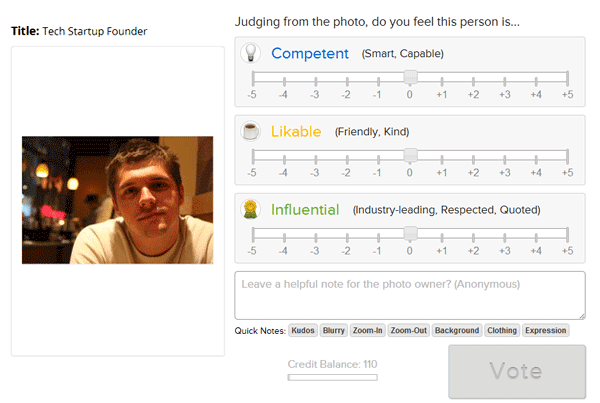 To begin the experiment, photos were tagged to denote the presence of (and/or degree of) a long list of characteristics. A small subset of these required unique programmatic tagging, as in photo brightness or darkness, in order to control absolute values.

Ben, our resident mathematician, then composed an analysis that isolated each condition so its impact could be measured independently. Upon examining each characteristic’s p-value to confirm or deny statistical significance, we narrowed our findings to a list of reliable dos and don’ts. 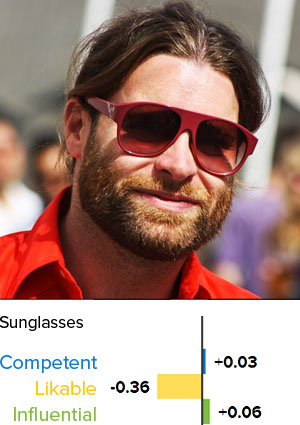 Here is an overview of what we learned (followed by a nice, big visual of our data all together).

Thinking about “playing it cool” in your profile photos? Think again. Apparently eye blockage, as from sunglasses, can significantly harm your impression.

The effect changes depending on what is obstructing the eyes, though.

Sunglasses specifically may be suave and mysterious, but at a cost. A sunglass wearer’s Likable score drops by an average of -0.36.

On the contrary, eye obstruction via hair, glare, and shadow didn’t make a difference in Likability, but brought down Competence and Influence scores by -0.29 and -0.31 respectively. 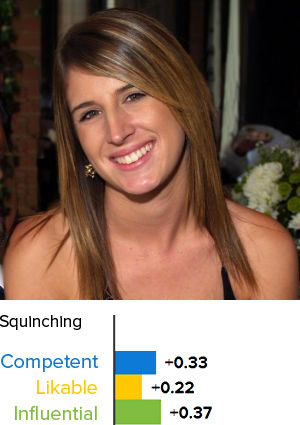 Another effect of note was the squinch. (Do read our linked post if you haven’t heard the term before.)

The gist of the concept is this: wide open eyes commonly denote fear, whereas slightly squinted eyes portray comfort and confidence.

As a consequence, squinching eyes garner an average gain of +0.33 for Competence, +0.22 for Likability, and +0.37 for Influence.

And as it turns out, for good reason. A shadow line that outlines the jaw all the way around ups ones score by +0.24 for Competence, +0.18 for Likability, and +0.18 for Influence.

Note: If the shadow separating your chin and neck isn’t dark enough, this is one characteristic you might be able to improve slightly in Photoshop. 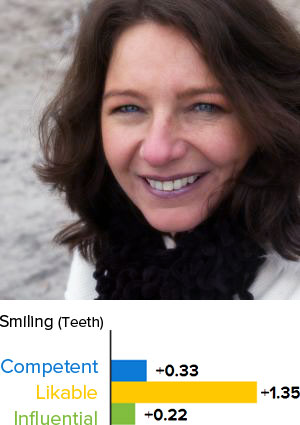 By far the most impactful characteristic we found in this study, though, is a particular kind of smile.

To our surprise, a closed mouth smile has about half the effect on Likability and no statistically-significant effect on Competence or Influence.

Too much of a good thing can backfire, though. If you take your open mouth smile one step further into a laughing smile, you’ll get a Likability push up to +1.49 but lose your gains on perceived Competence and Influence. 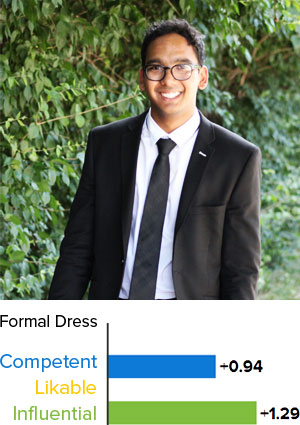 The clothes don’t make the man, but the eye has difficulty distinguishing the difference.

As it were, nothing we tested paid greater gains in perceived Competence and Influence than formal dress— an average increase of +0.94 and +1.29, respectively.

If this bums you out, you’re not alone! We wanted to believe that dress wouldn’t be such a major factor. (Ben, specifically, is not a fan of the suit jacket.)

Our measure of formality was represented by a dark-colored suit over a light-colored button down (with tie, for men) being most formal. Formality was deducted for missing tie or jacket. Bold or unusual colors and trendy details were judged as slightly less formal as well, all the way to t-shirts and jeans which were marked “informal.” 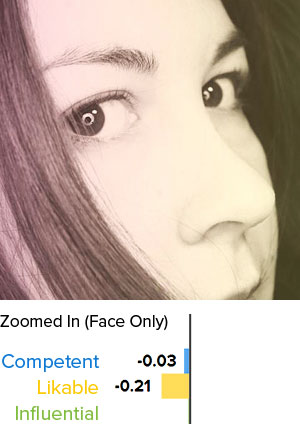 When it comes to the “amount” of person shown, we found that a bust (head and shoulders) or torso (head to waist) shot is preferable.

Face-only close-ups pulled Likability scores down by an average of -0.21.

Full body photos negatively affected both Competence and Influence by -0.29.

The most interesting thing we learned about Setting was its lack of statistically-significant effect.

This came as a relief to me, I must admit, because I’m a strong believer in personal branding and having one’s portrait taken in whatever setting best suits them.

When it comes to pie and photo editing, moderation is key. Your best move, we found, is just to avoid any kind of extreme. 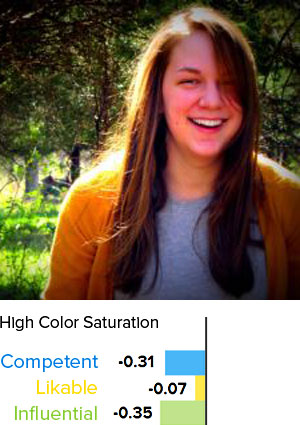 For instance, we found that having a too-dark photo (one that mimics nighttime or a dark room) can drop your Likable score by an average of -0.38.

A very high color saturation, on the other hand, tends to make everything suffer. One’s perceived Competence drops by -0.31, Likability by -0.07, and Influence by -0.35. Who knew people had a thing against vibrant colors?

As for black and white photos, we couldn’t come up with any statistically-significant effect— positive or negative.

Ben and I were really expecting to see something like a slight rise in Influence and slight fall in Likability. But alas, there is no significant difference, after all.

All that said, check out the graphic below for a visual of all our findings together.